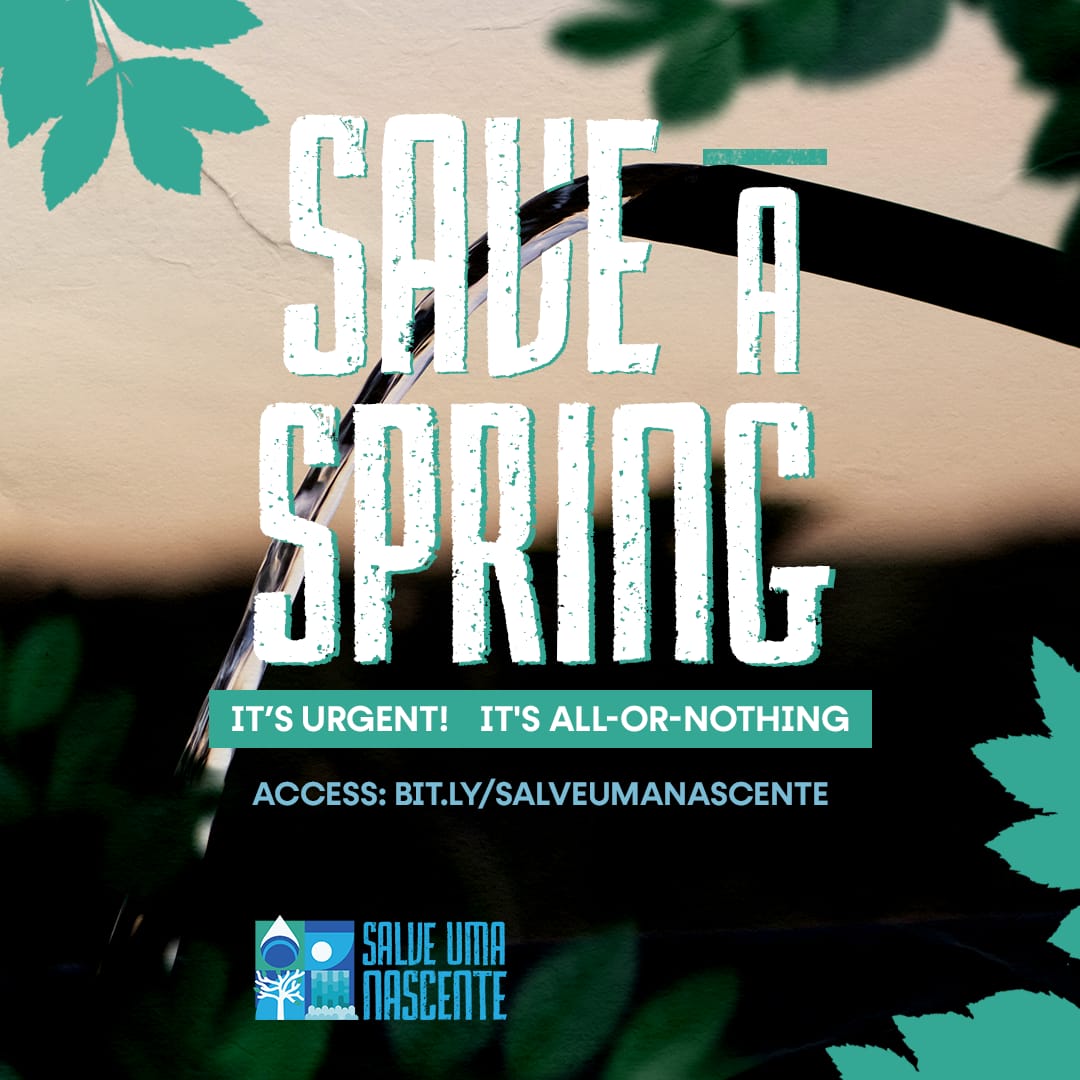 Initiative of the Pastoral Land Commission (CPT), the Crowdfunding Campaign alerts to the urgency of conservation of the Cerrado and has five fundraising goals. Supporters can receive rewards such as digital art, ecobags, accessories, handmade products and even workshop slots.

In line with the National Cerrado Day, celebrated last September 11, the Articulation of the Pastoral Land Commission (CPT) in the Cerrado launched the Crowdfunding Campaign, Save a Spring, on the Benfeitoria platform. Each year, 10 small rivers die in the biome. In the face of this wave of devastation, the main objective of the initiative is to recover five springs that are at risk of disappearing, located in peasant communities accompanied by the CPT in five states: Maranhão, Piauí, Goiás, Mato Grosso and Mato Grosso do Sul.

The campaign works with five fundraising goals, totaling R$ 110,000 reais (U$ 20.000) The dynamic of funding of the first goal is All or Nothing, a dynamic in which the promoter of the funding only receives the money if it reaches its goal. The first goal of Save a Spring represents the minimum value necessary to cover the costs of Benfeitoria – including its team, production costs and costs of sending the rewards, besides the cost to save one of the springs. However, our aim is to save five springs. The Campaign offers a list of rewards for certain amounts of donations which work as incentives, but it is possible to donate without asking for anything in return.

For more than 10 years, the Pastoral Land Commission has been recovering springs in the Cerrado. The first experiences were developed in the states of Goias and Mato Grosso. Since then, the CPT has carried out processes of on-going formation with peasant communities in the Cerrado as they struggle to defend the land, water and forests. In this sense, the Save a Spring Campaign seeks not only to conserve these sources of water but at the same time, to pave the way for the multiplication of this idea in other places. Our goal is to create a real protection network for the Cerrado.

"Recovering springs is essential for the continuity of life, water is a right of all people. The peoples of the countryside and the cities need the springs to supply the streams and rivers; it is this water that reaches the houses of the families for essential services. If the springs dry up, everyone will lack water, so the Save a Spring Campaign is urgent, it is a call to care for the sources of water. Protect, recover and conserve springs is a collective struggle, which needs each one of us. We count on the support of everyone to multiply this initiative", emphasizes Leila Cristina Lemes, coordinator of the Campaign and of the Articulation of the CPT's of the Cerrado.

The Campaign has the support of partner organizations such as the National Campaign in Defense of the Cerrado, the Landless Workers' Movement (MST), the Research Council in Agroecology and the Field Education department of the State University of Goiás (Gwatá), the Cerrado Museum, the Interstate Movement of Quebradeiras de Coco Babaçu (MIQCB), the popular communication collective Pinga Pinga, among others.

The Cerrado and its transition areas cover about 36% of country’s territory, i.e., more than 1/3 of Brazil, and is the most important area that replenishes the water table in the country. If conserved, the subterranean water that surfaces can guarantee quality and sufficient quantity to meet the needs of the rich Brazilian biodiversity, of the countryside as well as of the cities.

Known as the cradle of the waters, the Cerrado is home to the springs of eight of the twelve Brazilian watersheds, indispensable for the consumption and generation of energy in the country and to some of the main rivers that run through Brazil’s territory and the South American continent. Among these: Araguaia River, Tocantins River, São Francisco River, Paraguay River, Parnaíba River, Gurupi River, Jequitinhonha River, Paraná River and others.

In addition, the Cerrado is the most biodiverse savannah in the world. It is home to a huge diversity of traditional peoples and communities that have inhabited the region for more than 12,000 years. There are more than 80 indigenous ethnicities – including Xavante, Kraô-Kanela, Tapuia, Guarani Kaiowá, Terena, Xakriabá, Apinajé, - quilombolas, quebradeiras de coco babaçu, fundos e fechos de pasto, retireiros do Araguaia, vazanteiros, geraizeiros, sertanejos, barranqueiros, fishermen, riparians, family farmers, encamped landless families, settlers and many others.

However, in contrast to all this richness and diversity, Brazilian political planning treats the Cerrado as a region for the expansion of the agricultural frontier.

Data from the National Institute of Space Research (Inpe) indicate that, in 2020 deforestation in the Brazilian Cerrado totaled 7,300 km², the largest destruction having ocurred in the Matopiba region. In addition, the Institute recorded 31,566 wildfires in the Cerrado between January 1 and August 31 of 2021, the largest number of outbreaks of wildfires in that period since 2012.

The  Cerrado shelters the largest amount of perennial springs, which supply the rivers with water throughout the year. With deforestation, the bear soil undergoes a process of compacting. Without a forest cover, its capacity to retain water from rainfall decreases, making it difficult to replenish the water table. This process reduces the reservoirs of water that supply the streams, rivers and watersheds, increasing the risk of drought.

The decrease in these water reserves is not due to the lack of rainfall, but is directly related to the exploitation of the Cerrado in recent years by agribusiness and it also contributes to the drought of the Pantanal, the São Francisco River and also the Paraná River. All this devastation, burning, deforestation and the advance of monocultures has made an impact on the climate and the well-being of the peoples of the countryside and the cities. The springs are drying up, the rivers are silting up, and hence the necessity of introducing conservation practices and taking urgent measures.

Springs that will be saved

In the Vão o do Vico Territory, in the municipality of Santa Filomena. The Gamela indigenous community with 17 families has been suffering from the action of landgrabbers and the expansion of monoculture of soy. The protective forest cover of the spring was destroyed and the rains carried off much sand, burying many of the springs.

One of the springs of the Itapecuru River, a course of water 1,450 kilometers long and a width of 50 to 120 meters, which bathes the State of Maranhão. The first waters surface in the "Vão do Pinto", in the municipality of São Raimundo das Mangabeiras. The Itapecuru basin supplies 60% of the population of the state capital São Luís, as well as of other cities in the state.

The spring of the Caldas River supplies the entire district of Cruzeiro do Bom Jardim, located in the municipality of Silvânia. The 40 families that live there depend on family farming for survival. The community faces the problem of deforestation and the reduction of the waters with the development of soybean monoculture and the spraying of pesticides.

The spring to be recovered is in the Community Poço Azul, in the municipality of Poxorisu. The local community consists of 16 traditional families. The spring is drying up due to the lack of native vegetation, putting at risk the subsistence of the community, which needs the water for the cultivating vegetable gardens, productive backyards and cultivating small areas.

The spring to be recovered is in the municipality of Sidrolândia, within the area of a legal reserve. The families living in this settlement need to recover the spring, which dried up because of the cattle that tramped its banks. To recover it, wire and planks are needed in order to protect its access, in addition to  seedlings of native vegetation of the Cerrado.

Service: Launch campaign,  Save a Spring
Where: On the platform of Benfeitoria, in bit.ly/salveumanascente.